Relative to other European Jewish communities, Czech Jews historically enjoyed more freedoms and rights than those in other lands.  Still, its members were required to live within ghetto walls and were limited in their activities. Even so, many Jews in the Czech lands made great contributions to Czech society, both before and after they were given full civil rights. Rabbi Judah Low was so prominent that Emperor Rudolf II asked him to speak to him about the cabala.  The influential writer Franz Kafka was from Prague and is buried at the New Jewish Cemetery. 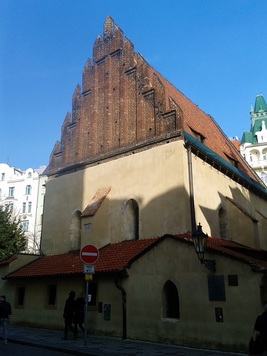 The Old-New Synagague
One of the most remarkable structures in Prague's Jewish Quarter is the Old-New Synagogue.  Dating from the 13th century, this Gothic building is so named because at the time it was built, it was newer than all the other synagogues, and now it is older than all the others.  It is one of the oldest, if not the oldest, standing synagogues in Europe, and it is the longest continually operating synagogue in Europe.

Other synagogues include the Maisl, the Pinkas and the Klausen.  It is in the Pinkas Synagogue that you will find the names of all of the Czech Jews who perished in the Holocaust painstakingly painted on the walls of the building.  Also, from here you can enter the Old Jewish Cemetary which was established in the 15th century.  It contains some 12,000 seemingly ancient and beautiful tombstones of the Jewish Quarter's residents. 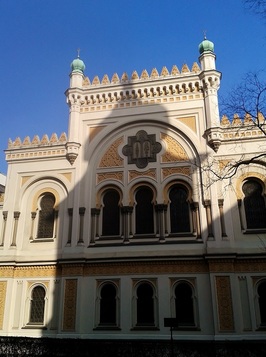 In addition to these structures, there are two synagogues located outside of the Jewish Quarter and the New Jewish Cemetery in Prague 3, all of which can be visited.  There's also a lot more to Czech Jewish history than what I've mentioned here, and a visit to Prague's Jewish Quarter, which functions as a museum as well as a collection of historical sites, will help you learn more about not only Czech but also Central European Jewish history.