It´s almost impossible to pick ONLY 10 sites as the top spots to visit in Prague, but I've done my best.  In fact, I've cheated a bit by grouping several of the sites on Old Town Square into one, and I did the same thing with Prague Castle.  The truth is there are many more sites that be on this list, so you get the picture.  There is just so much of historical and artistic significance in Prague that it is hard to boil it down to any "top" list.  But if your time is limited, this is what you should see (and not in any particular order): 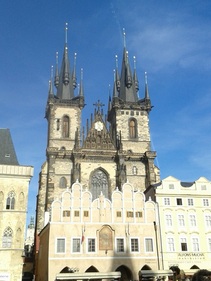 Tyn Church – Begun in the 14th century, this imposing Gothic structure brings to mind Hogwarts or some other fairytale-like edifice.  The High Gothic spires of this church are pretty much unique to Prague.  And another interesting fact about this church is the fact that astronomer Tycho Brahe is buried there.

Jan Hus Memorial - Erected in 1915 to commemorate the 500th anniversary of the Protestant reformer's death by burning at the stake, this Art Nouveau statue by Ladislav Saloun is also a popular meeting point in the center of the square. 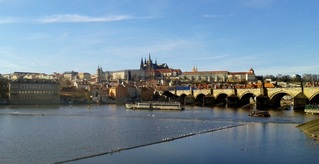 The Charles Bridge and Prague Castle
6.  Charles Bridge - Architect Peter Parler built this Gothic bridge for King Charles IV in the 14th century.  It is now one of the oldest and most beautiful bridges in Europe.

7.  Prague Castle – This part of Prague is like a little city unto itself, as were all of the original five „towns“ of Prague (Old Town, New Town, Mala Strana, Prague Castle and the Jewish Quarter).  In fact, the oldest remnants found in the city of Prague were found here. 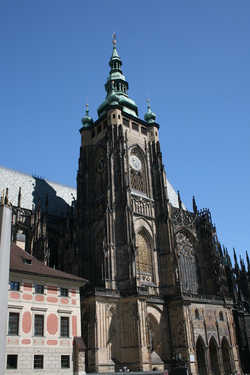 Belvedere (Royal Summer Palace) - This royal residence is a rare example of Renaissance architecture in Prague.  Its roof resembles the hull of a ship, and its location offers great views of the city below.

8.  St. Nicholas in Mala Strana - High Baroque probably understates the look of this 18th-century Jesuit church designed the father and son architects Kristoff and Kilian Dientzenhoffer.  It was meant to make a statement during the Counter-reformation, and it did!

9.  Waldstein (Wallenstein) Gardens - These sumptuous gardens built by Count Wallenstein take luxury to a new dimension.  Stroll through the statues by Adrien de Vries (these are copies - the Swedes ran off with the originals in the Thirty Years' War) with other visitors and a few resident peacocks.

10. Jewish Cemetary - Moving doesn't begin to describe the experience of walking through the jumbled and crowded ancient tombstones marking twelve layers of graves in what was once a walled ghetto.